Being a Chapter Master of the Imperial Fists is not about being the lord of one thousand Space Marines. It is about acting as a servant and shield to all Humanity.

A fun little side project this week, with my take on Gregor Dessian, current Chapter Master of the Imperial Fists. This is for the ‘We Paint Minis‘ #ChapterMasterChallenge on Twitter. 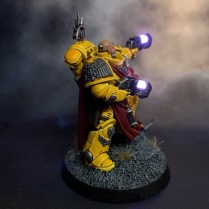 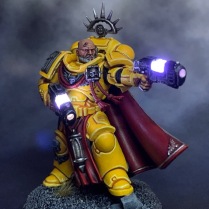 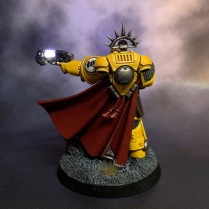 This is one of those very rare occasions (for me anyway) when the miniature survives its translation from my brain to the finished model almost entirely unaltered. When the Chapter Master Challenge themed around the Imperial Fists came up, I knew I wanted to do a ‘modern’ Primaris Chapter Master. I also knew that I didn’t want to give him a power fist or thunder hammer. As much as I love these two iconic weapons of the Fists, I thought that was probably a route that a lot of other people participating in the challenge would go down. Instead I wanted something that wasn’t necessarily commonly associated with the Imperial Fists, but still implied this was a hero with access to rare and valuable equipment. In the end I settled on twin custom plasma pistols as they satisfied these criteria, plus it was a chance to get some LEDs in there too! 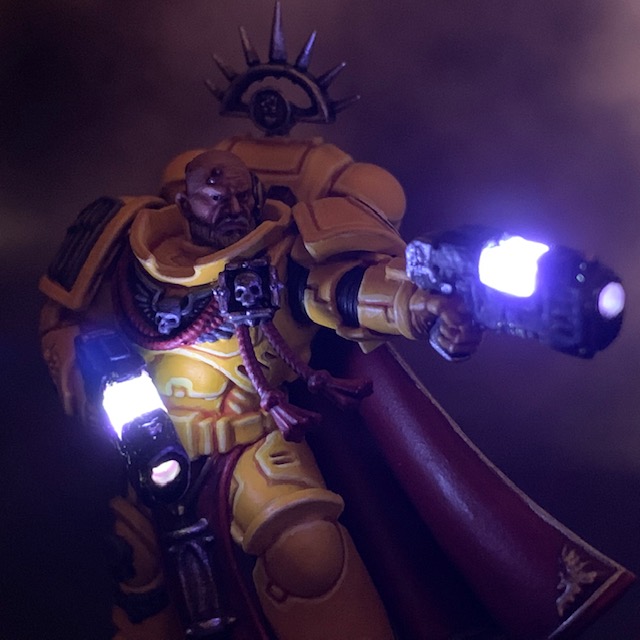 Gregor’s master-crafted twin plasma pistols, Brick and Mortar are a rare treasure from the armoury of the Phalanx. Their power cells are charged directly from plasma vented from the battle station’s reactor, ensuring the Chapter Master always carries with him a direct link to the beating heart of the Imperial Fists Fortress monastery. 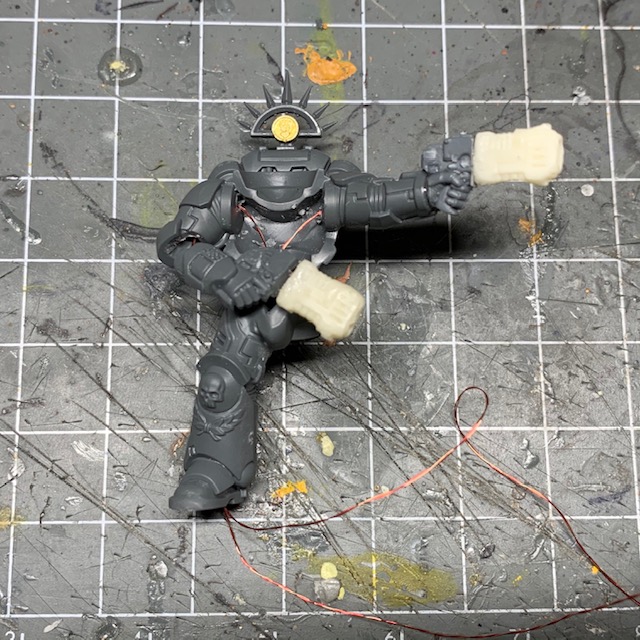 As you can see in the image above, the connections for the LEDs (in this case Nano Chip LEDs) run through each arm, through the torso and down one of the legs into the coin cell battery hidden in the base. If you’d like to have a go at a similar conversion, then I used the techniques detailed in my Simple Plasma Weapons tutorial.

That was a fun diversion for this week. Next week, back to the Crimson Fists!

Something a bit different today; I thought I’d take a break from painting Kantor Blue and remind myself of the “fun” of painting yellow! So here’s a Breacher for my Age of Darkness ‘True Scale’ Imperial Fists. 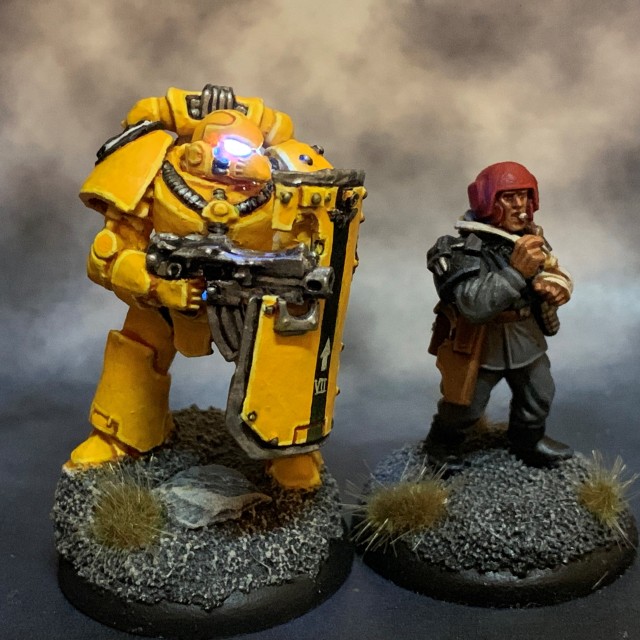 I started this army back in 2014, when there was no such thing as Primaris and if you wanted an embiggened Marine you had to do it yourself! 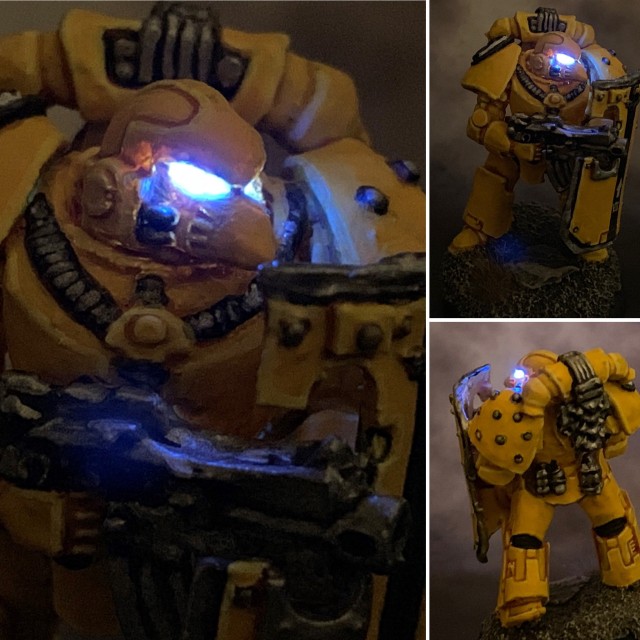 This is my fifth completed Breacher, making the squad half done. Although the other models are at least assembled and undercoated. 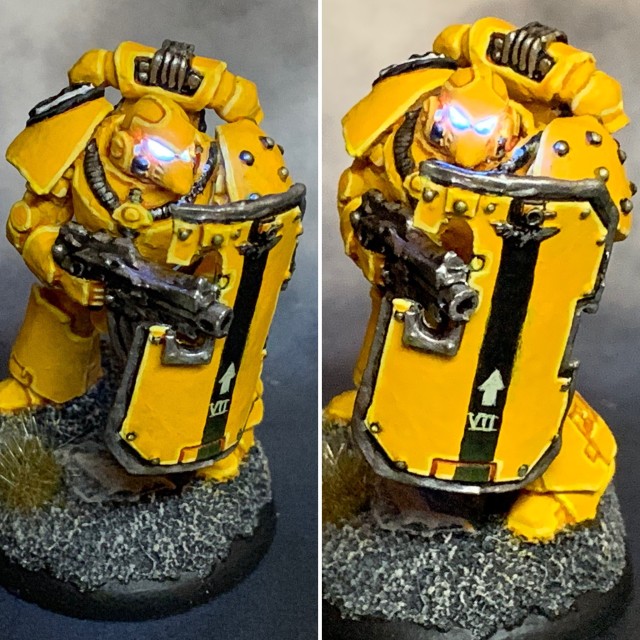 The idea behind this army is that it represents mid-late Heresy Imperial Fists. They’ve seen some action; they’ve been to Mars to recover the prototype MkV and MkVI armour, they’ve completed missions for Rogal Dorn in the Segmentum Solar, but now the Warmaster is closing in and they’re rushing back to man the walls…

My Imperial Fists haven’t really featured on this blog very much yet, so here are a few more pictures for the benefit of anyone who hasn’t seen them before. There’s even more information in this log that I used to run over at the Bolger and Chainsword forum. 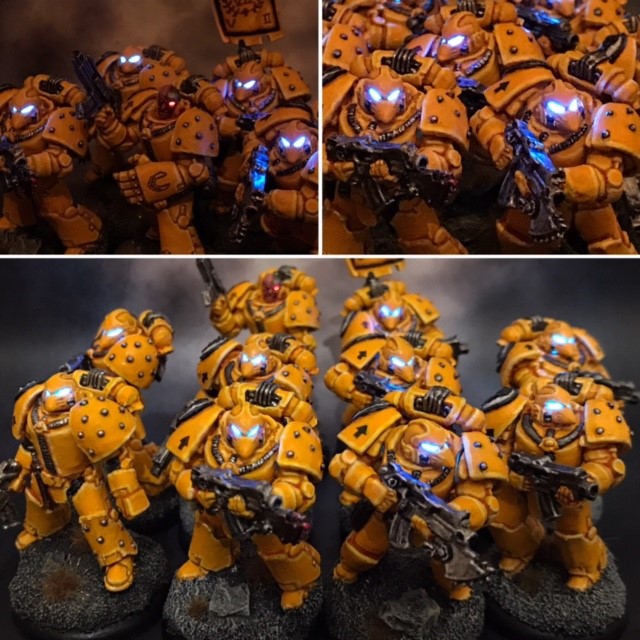 The blue LED helmet eye lenses use my standard method as detailed in this tutorial. In fact these were the first models to pioneer the resin casting technique! Some of them are still on their original CR2032 batteries – five years later! 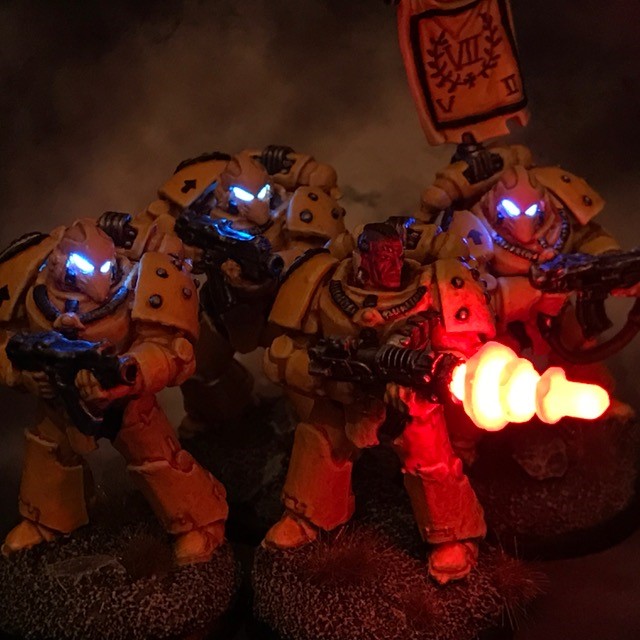 The volkite energy flare is one of my favourite LED effects that I’ve done so far. You can see more of my Imperial Fists on Instagram, if you scroll down far enough.

Anatomy of a True Scale Astartes

If you’re wondering what parts I use to build my True Scale Marines, I’ve done a break-down below. This technique was heavily influenced by the work of my good friend Apologist. Check out his Death of a Rubricist blog for more True Scale goodness and general painting excellence.

I refer to this armour pattern as MkVI-S (the S is for ‘Stark’). In my mind it represents an early variant of MkVI. It’s still recognisable, but didn’t quite make it into full production after the Heresy. 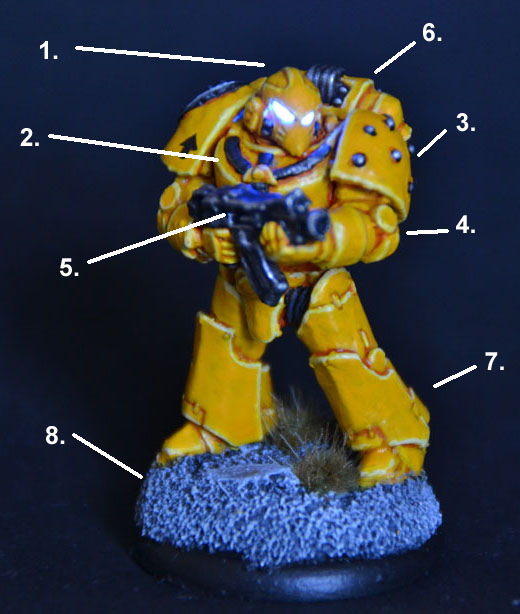 1. Head – MkVI head taken from the Ravenwing Black Knight sprue. Skull badge removed from forehead. Aerial removed from left side and left side re-sculpted in Green Stuff to match right.

2. Torso – Custom Green Stuff sculpt over standard Space Marine torso. Only the neck socket and plug for backpack remain on show and unmodified.

4. Arms – The arms and hand are a mix of from the Tactical, Assault and Grey Knight Terminator sprues. They have had reinforced ‘cuffs’ added with Green Stuff.

7. Legs – Forge World Legion Tartaros Terminator legs. The ‘sunken’ panels on the thighs have been filled in to increase the diameter of the thighs and give a smooth appearance. Although if I was starting this army now I’d definitely use the plastic versions!

8. Base – Plastic 30mm rolled shoulder base with milliput, sand and slate top.

Anyway, I hope that’s all been informative, and a fun break from Crimson Fists and Genestealer Cultists!