Two years and ten months after posting my first LED Primaris Crimson Fist from the Dark Imperium boxed set on my Instagram, I’ve finally finished painting a minimum sized Battalion of two HQ choices and three Troops choices! I felt that this momentous occasion called for a group photo and a quick retrospective.

I was on something of a roll with my painting last week and completed Brother Isario and Brother Merius (don’t forget, LED helmet eye lens tutorial can be found here). 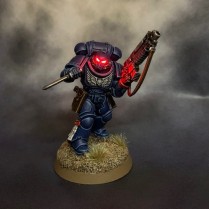 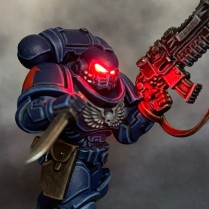 Traitors are a cancer, and cancer requires a blade to excise. – Brother Isario 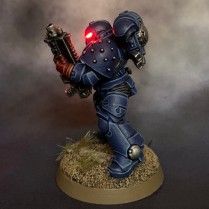 I relish the dry click of an empty magazine. It tells me another thirty Orks are dead. – Brother Merius

With these two Intercessors complete and added to Brother Lyrast, Comms Specialist Cleulis and Sergeant Galvéz, this in turn completed Squad Galvéz…

…which in turn, when added to my other two squads, Lieutenants and Captain, completed the minimum-sized battalion!

I’m pleased with how they’ve turned out, and I hope you’ve enjoyed the journey so far! So what next? Well that’s not the Crimson Fists finished by any means! It’s probably time to start thinking about the Elite and Heavy support slots so I have a little more firepower on the tabletop. Plus there’s the Reiver and Hellblaster squads to finish, and ‘Armies on Parade’ to think about in the autumn…so plenty more to do!