Long-time readers may remember me picking up two copies on Conquest issue 1 – six Intercessors for less than £4 was a bargain, not to mention the paints – and noting that I was going to use them as a basis for a converted squad. Well, here’s the first of them:

Brother-Sergeant Yniguis Galvez is a veteran of the first intake of Primaris Marines created on Rynn’s World. Soon after the Roboute Guilliman shared the secret of creating this new breed of Space Marine with the Crimson Fists, Pedro Cantor dispatched the newly reinforced battle companies to reinforced beleaguered Imperial worlds in the surrounding Loki sector.

The foes were many, and not even a Primaris Marine can be everywhere at once. Eventually the respective company captains found they had no choice but to divide their companies into demi-companies, then squads, and finally kill teams, in order to spread themselves as far as they could. These actions saw Galvez leading his men into battle against Orks, Aeldari, and a myriad of other heretics and xenos who were capitalising on the anarchy that flourished in the wake of the Great Rift.

I knew I was going to have to do some conversion work if I wanted a squad of five distinct individuals. The models six were three duplicate monoposes, two of which are very similar to those found in the Dark Imperium boxed set.

The main areas of conversion are the head swap – fairly inevitable with LED models anyway – the removal of the helmet mag-locked to the hip, the change of the pointing hand to be holding a severed Ork head, and the addition of a sheathed sword. The LED eye lenses were achieved following my standard LED eye lense tutorial. 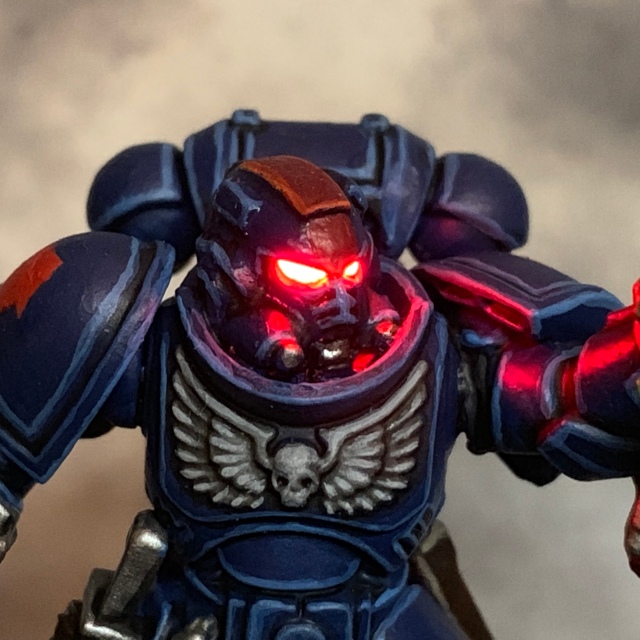 Galvez favours the ‘Gravis’ pattern helm for his Mark X armour. As both a sergeant and a hand-picked kill team leader, he has a certain amount of leeway in selecting equipment from the armoury. It is likely that he favours the ‘Gravis’ helm for its improved communications suit, it’s intimidating appearance, or perhaps both. With so few Marines at his disposal Galvez knew that psychological warfare, properly applied, could make his meagre numbers seem much larger. After all, even the greenskins respect a brutal and intimidating opponent!

I took some inspiration from the image of the Marine holding a severed Ork head on the classic Rogue Trader cover, without copying it exactly. I went for the ‘Gravis’ helm as I think it looks quite threatening, and I wanted to further enhance the “brutal” look of the sergeant. I’ve always enjoyed the juxtaposition of how Space Marines can look terrifying while still being the “good guys” – for certain values of “good” of course!

I have a reasonable-sized Ork army, and the associated collection of bitz, so digging out a spare head was easy. I selected one that looked suitably fed-up, then sculpted on the hair-squig and the neck (Ork boyz have a hole in the back of their head where they connect to the neck mounted on the torso) using Green Stuff. 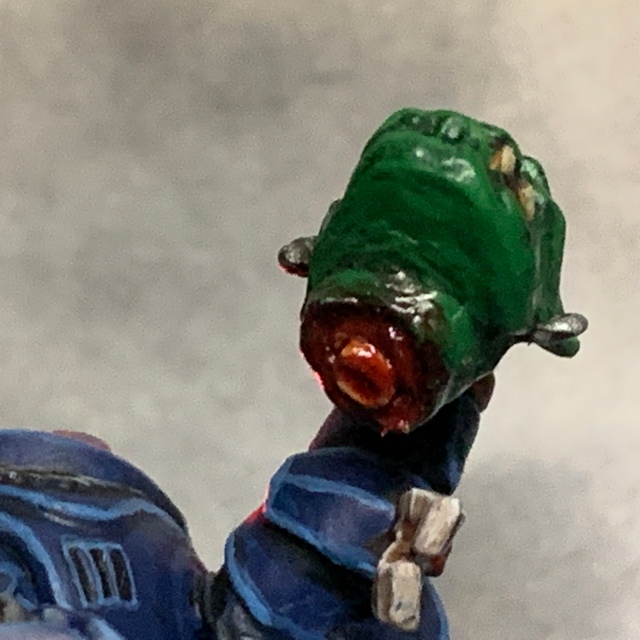 As ever, more Crimson Fists are on the way over the coming weeks. But come back here tomorrow for something entirely different…