Why make your point with words when it’s so much faster to make it with the tip of a sword? 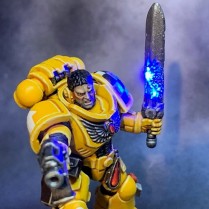 Sergeant Lugeo is the third member of my (slow growing) Lamenters kill team. If you missed the previous members of the kill team then you can find previous posts on the MkVI Lamenter here and the Lamenter Breacher here.

My Lamenters kill team is intended to be Badab War themed, which of course means no Primaris Marines. However I do love the Primaris scale and proportions, so you may have noticed that Sergeant Lugeo is based off a Primaris model, like the other members of the team. I took some time to remove a lot of the Primaris-specific detail, like the ankle stabilisers, backpack and some of the chest detail. I then sculpted replacement detail with modelling putty. Hopefully he now looks like he is wearing MkVII power armour rather than the distinctive MkX armour of the Primaris Marines.

So that’s three Lamenters down, and four more to go!

One thought on “Lamenters Sergeant with LED Power Sword”