Behold, mortals! Darrakar, Guardian of Souls is upon you! Fear his baleful Nightmare Lantern! 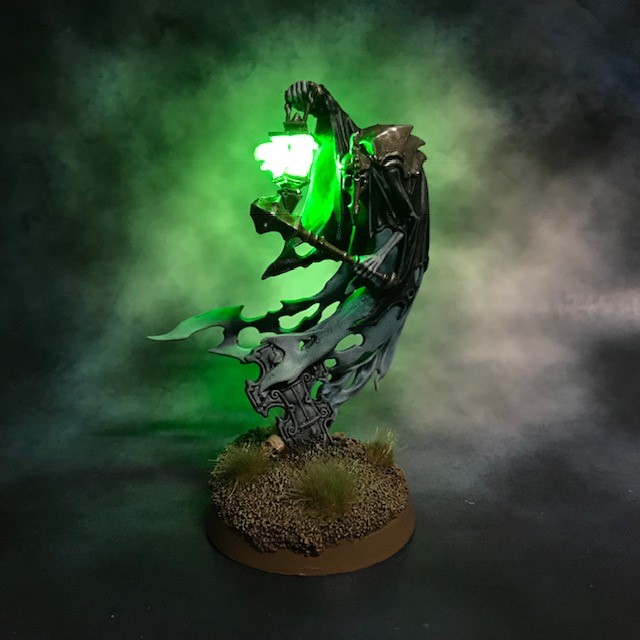 Darrakar is one of the two special limited edition models that were released for a short time to celebrate the recent opening of 500th Games Workshop store. A friend picked him up as a present for me, and as it’s such an awesome model I had to bump him up to the front of the painting/LED queue! 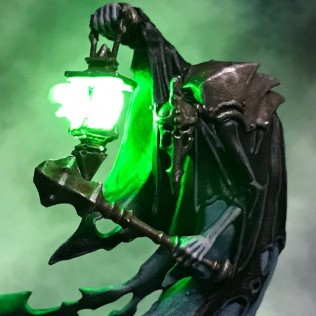 As I discuss in my design tutorial, I always think that the best LED miniatures are like magic tricks. If someone can look at the miniature and it’s not immediately obvious how it’s done, then that produces the best reaction. But, like a magic trick, if it’s super-obvious then it’s less impressive. If you can see the card up the magician’s sleeve – or in this case the wires and battery – then it won’t garner much more than a shrug.

So how was Darrakar’s lantern done? Essentially the basic principles can be found in LED Eye Lens Tutorial, although in this case I was working with a ghostly lantern instead of a Space Marine helmet! The image below shows the lantern switched off so everything can be seen a little more clearly.

The battery is in the base, as normal. The wires come up through a hole in the middle of the gravestone and then cling to the back of one of the wispy tails and from there run up into the torso. I didn’t try and drill the ethereal wisps. Instead, because they’re very thin wires, they’re glued to the back of the wisp and then further disguised with green stuff.

From there they run through the torso and up to the lantern arm. Darrakar’s original arm was too spindly to hide wires, so I essentially removed the arm and replaced it with the wires themselves. I then extended the sleeve of the shroud with green stuff to hide the wires – in this case the magician really did have something up his sleeve!

For the lantern, everything from the top of the flames downwards is a resin recast. I drilled a hole in this and inserted a green LED. I then cut away the handle of the lantern and made a new handle from the legs of the LED! These then connect to the wires just behind the hand.

So there we are, a little insight into the Guardian of Souls and his Nightmare Lantern. I’d encourage everyone to have a go at this themselves – the Nighthaunt model range are ripe for the use of ghostly green and blue LEDs!

One thought on “Darrakar and the Nightmare Lantern”