The guys at Green Stuff World, providers of many useful hobby supplies, will soon be selling a new Conductive Paint, and they got in touch to ask if I’d like to try it before it goes on general release at the end of August. Of course this is right up my alley, so I said yes please! Full disclosure, this article isn’t a paid add, but they were kind enough to supply the bottle for free. 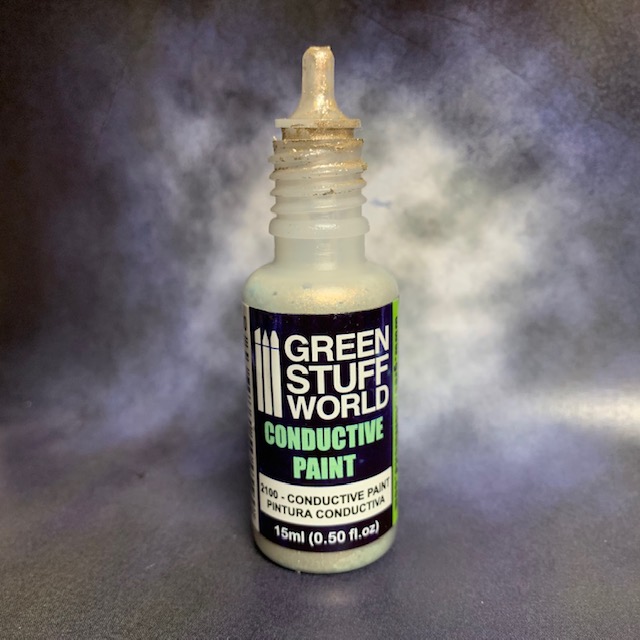 So what is it?

As the name suggests, Conductive Paint is a paint that conducts electricity, which is useful for either creating electronic circuits from scratch or repairing gaps in existing circuits. So how does it work? Detailed ingredients aren’t listed – fair enough – but it is apparently water based and also contains silver particles, so I imagine it’s simply a high concentration of silver particles suspended in an acrylic paint medium. It seems quite similar to ElectroDAG or silverDAG, if you’ve ever used those, which are basically conductive adhesives. 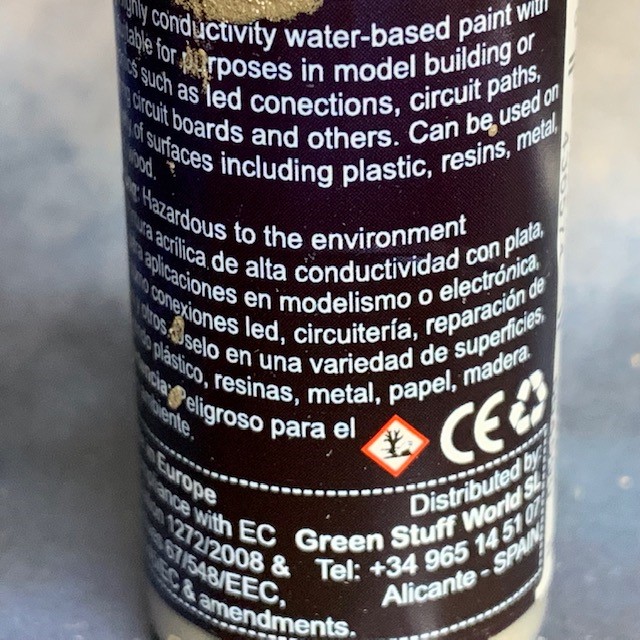 The only GHS symbol is ‘Harmful to the Environment’, which stands to reason. Although it’s not listed as ‘Irritant’ or ‘Harmful’, I can’t imagine you’d want to get this in your eyes, so do be careful! During the course of testing I got a bit on my skin, but it easily washed off with soap and water.

One word of warning – this product is supplied in a dropper bottle. I gave it a good shake before removing the lid, and attempting to dispense some of the paint. Only a very small drop came out, so I assumed it was quite viscous and squeezed harder, at which point the spout of the dropper bottle flew off and the paint splashed everywhere! So please exercise caution when dispensing. As an aside, if it gets on your clothes, you can rub it off by hand scrubbing it in water when it has dried! 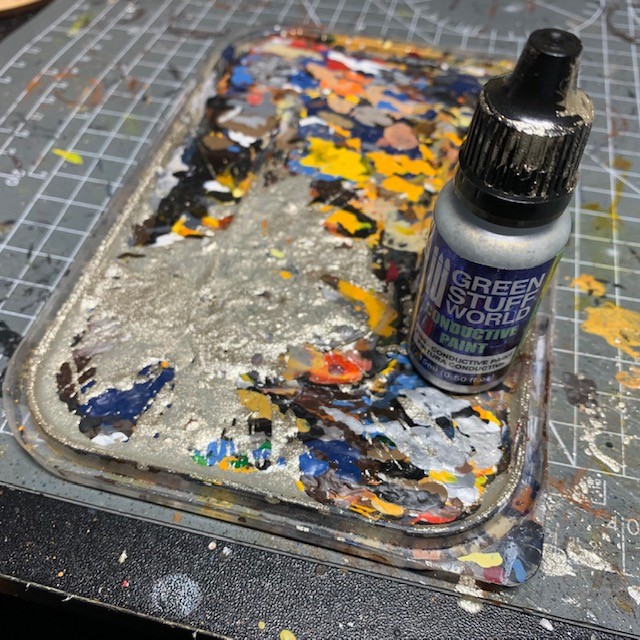 My background is in science, so the first thing I felt compelled to do was test the properties of the paint. I painted two lines on a 10cm strip of plastic card – one over bare plastic and one over an undercoat spray. This was intended to check whether the paint needed an undercoat to key to and if not having an undercoat effected its conductivity. 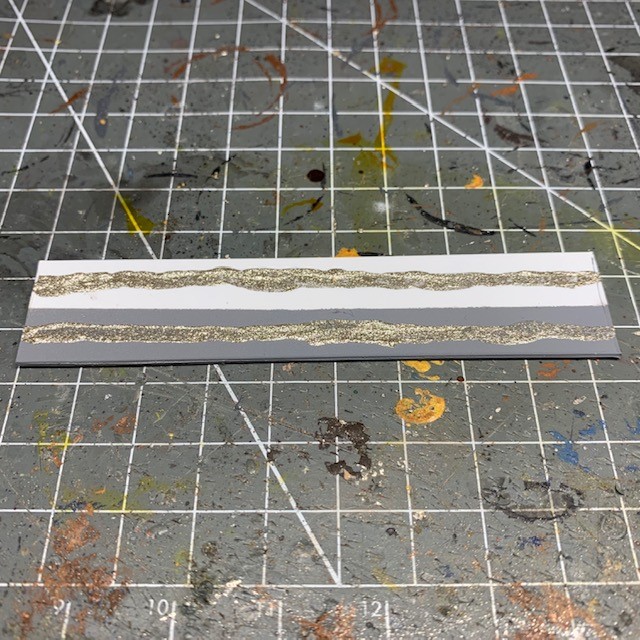 The lines are a bit wonky as I used an old brush. I wasn’t sure how easily this stuff would clean off and I didn’t want to ruin any of my good brushes. But as it turns out, it cleans off very easily under running water. Just be careful about cleaning it in a water pot, and then using that water again with normal paints, as you’re likely to contaminate your brush and the other paints with the silver particles.

Once the paint had dried I measured the resistance with a digital multi-meter. It averaged at about 5.5 Ω per cm of track. This will obviously vary with the thickness that the paint is applied.

What can we use it for?

Basic tests out of the way, what can we actually use this conductive paint it for? 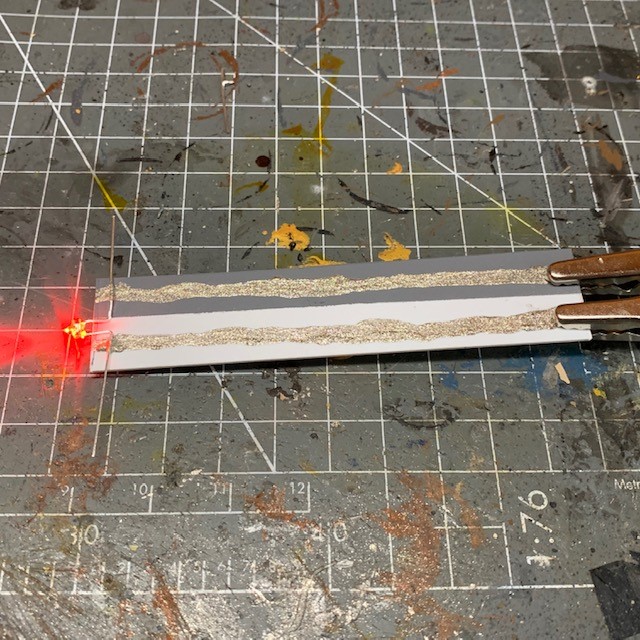 It can definitely be used for completing circuits and connecting LEDs. The LED shown above is simply held in place by applying the conductive paint thickly over the legs and allowing it to dry. No solder used! 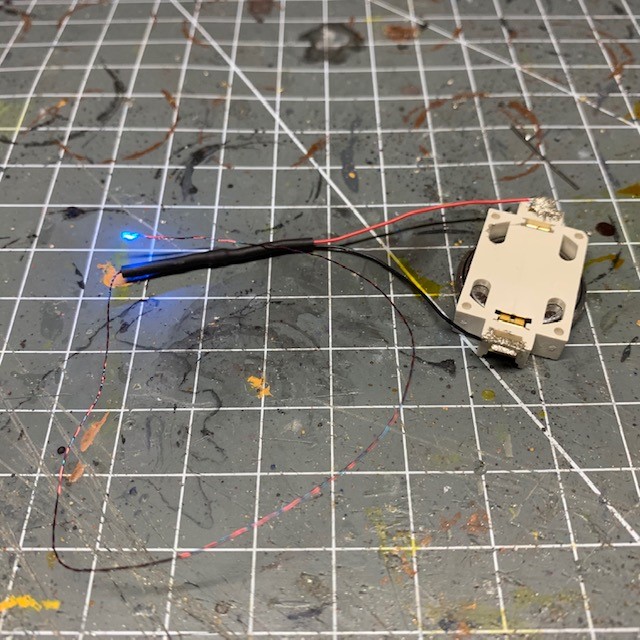 You can also use it in place of solder to connect wires to a battery holder, again applying a thick layer of the paint. The LED shown above is a blue Nano Chip LED from Small Scale Lights. 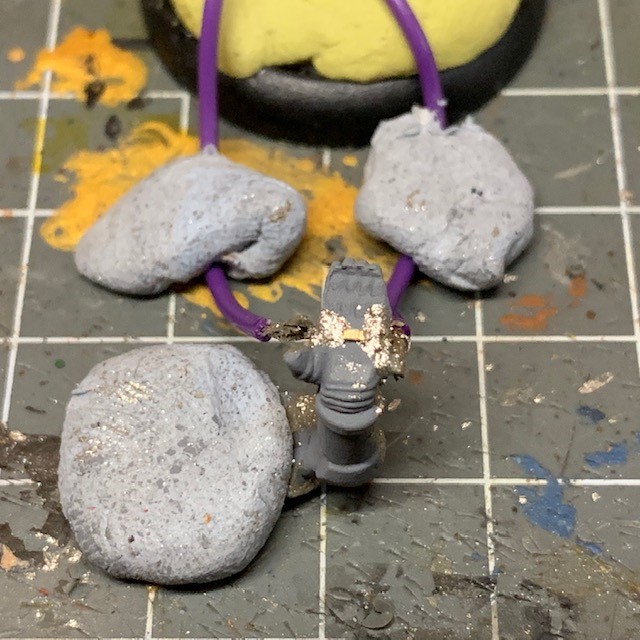 It can also be used for mounting tiny chip LEDs without any wires. The chip shown above is a Kingbright KPHHS-1005PBC-A Blue Low Profile LED mounted in a standard 0402 chip package from Rapid Electronics. These things are small, in case that’s not clear from the photo. Each chip is 1mm x 0.5mm x 0.5mm, so make sure you have some very fine tweezers handy if you’re going to be working with them. These chip LEDs have pads on the bottom at both of the narrow ends, so you just need to leave a break between the two sides of the circuit that is slightly narrower than the length of the LED, then press the chip into the conductive paint while it is still wet. When it drys, it will hold the chip in place and complete the circuit. In the image above I have added the chip to the palm of a plastic space marine arm and then attached two wires using the conductive paint, one on either side of the arm. 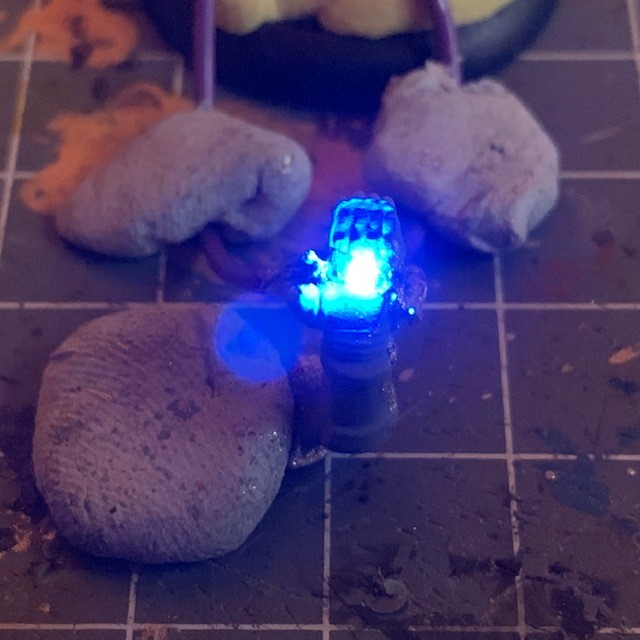 Combing these tiny chips and the conductive paint with a bit of resin casting, you could potentially use this to make cool effects like magical flames, psychic lightning or Iron Man style hand blasters, for example. On a complete model, the connections between the conductive paint tracks and the wires could be hidden inside the body. It could probably also be used as an alternative method of completing a LED muzzle flare circuit, rather than drilling out the barrel of the gun and passing wires through.

In conclusion, I really like this product! It’s certainly not a magical solution to all my circuit needs, but it definitely is a useful tool to have at my disposal. The ability to use it to mount chip LEDs and using it to make solderless connections is especially handy.

Where it doesn’t compare to solder is in long-term durability and strength of the connections, but in effect you’re trading that off for the speed and convenience of applying the paint.

The other potential downside is the resistance. The 5.5 Ω per cm may not sound like a lot, but when you compare it to the resistance of 0.1mm copper wire, which will be about 0.02 Ω per cm, it soon adds up. When I first started testing the conductive paint I envisaged using it to mount LEDs on a model – such as the chip LED mounted on the arm shown above – and then painting tracks all the way down the side of the model (hidden under the top paint coat) to connect it to the battery in the base. However on reflection that might be tricky, as if you layer on the conductive paint too thick then it will be hard to hide under the regular paint, but if you make it too thin then the resistance could be too great. It would effectively be like adding a 50 or 100 Ω resistor into the circuit, which would be a problem.

Having said that, it definitely seems to work as intended for short connections, and I’ll certainly buy more when my free sample runs out! Conductive Paint will be available from Green Stuff World at the end of August.